The survey, conducted by Duke University and Grenoble École de Management, is the world’s longest-running and most comprehensive research on senior finance executives and contains the responses of more than 800 CFOs worldwide.

The role of the CFO has widened over the last two decades. CFOs are accountable for the bottom line as well as helping shape corporate strategy. One hopes that finance chiefs are not overworking themselves to the point of jeopardizing their health, which in turn could put the financial health of the company at risk.

These trends hold across industries and around the world. The typical Asian CFO works 73 percent of their waking hours, slightly higher than CFOs in Europe (72), Africa (70), and Latin America (69). CFOs from all regions indicate that they would prefer to work about 20 percent fewer waking hours per week.


Current Work-Life Balance in % Per Day Innovation Continues at a Rapid Pace

Sixty-two percent of the U.S. CFOs indicate that the pace of innovation at their firms has grown faster in the past three years. Among these companies, 63 percent indicate that the rapid pace of change has caused their firms to focus more on the near term, and 40 percent say that they now choose projects with shorter lives. Given the acceleration in innovation, firms don’t want to be shackled by longer-term investments, especially in technology that can quickly become obsolete. You expect companies to pivot, and shorter-term projects allow for flexibility and speed.

Among these firms, 76 percent indicate that their capital spending has increased as a result of more rapid innovation. Forty-six percent say they have increased research and development in response, with 31 percent saying they will tackle ambitious “moon shot” projects.


The Tight Labor Market Is a Top Concern

The proportion of firms indicating that they are having difficulty hiring and retaining qualified employees is at a two-decade high, with 43 percent of CFOs calling it a top concern. The median U.S. firm says that it plans to increase employment by about 2 percent in 2018. Due in part to the tight labor market, U.S. companies expect to pay higher wages, with median wage growth of about 3 percent over the next 12 months. Wage growth should be strongest in the tech, energy, and retail/wholesale industries.

After the labor market, the next largest concern among U.S. CFOs is the cost of benefits, with health care costs expected to rise by more than 8 percent next year. Nearly half of U.S. companies indicate that the cost of employee health benefits crowds out their ability to spend on long-term corporate investment. Data security issues rose to 3rd on the list of top concerns, its highest ranking ever.

The Optimism Index in the United Statesjumped to 69 on a 100-point scale this quarter. Among CFOs who responded to the survey after the Senate passed their version of the tax reform bill, optimism spiked to 73, which is the highest U.S. optimism ever recorded in the history of the survey.

The extremely high level of business optimism is tied to the long-awaited corporate tax reform currently moving through Congress. More broadly, optimism is up around the world. Our analysis of past results shows the CFO Optimism Index is an accurate predictor of future economic growth and hiring, therefore 2018 looks to be a very promising year for the world economy. In Canada, optimism remains strong at 64. Capital spending should increase by about 4 percent and employment by about 2 percent in 2018.

Optimism in Europe jumped to 67 this quarter, the highest level in a dozen years. The United Kingdomhas the lowest optimism among responding European countries, at 58. Capital spending is expected to grow 4.8 percent in 2018, and median employment should grow 1 percent. For the second consecutive quarter, and only the second time ever, the top concern among European CFOs is attracting and retaining qualified employees, followed by regulatory requirements, government policies, and data security.

Nearly 60 percent of European companies say that the pace of change and innovation has quickened in the past three years. Of these companies, three-fourths indicate that they have increased capital spending in response, and nearly two-thirds have increased R&D. Fifty-five percent of European CFOs say their firms focus more on the early years of the planning horizon due to the fast pace of innovation. Less than one-third indicate that they now require a shorter payback period or have shortened the horizon of their investments, the smallest percentage in the world. 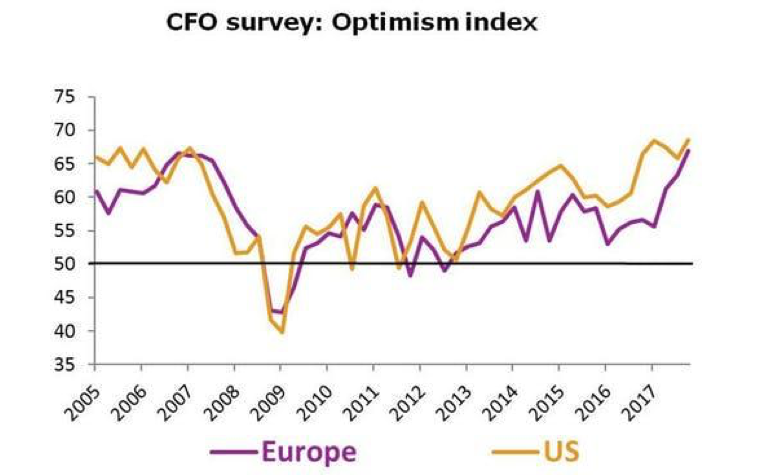 Optimism is also strong in Asia, at 66. Difficulty attracting employees, economic uncertainty, and regulation and government policies are top concerns. Median 5 percent growth in capital spending and 2 percent employment growth are expected in 2018. Nearly three-fourths of Asian firms indicate that the pace of innovation has quickened over the past three years.

Among these firms, 71 percent say they have increased capital spending inresponse, 65 percent have increased R&D spending, and 56 percent have increased moon shot projects. Eighty-six percent of Asian firms indicate that the fast pace of change has led them to focus more on the early years in their planning horizons, and 55 percent have formally reduced the length of their long-range plan. Forty-three percent of companies indicate that spending on shorter-term projects has crowded out spending on long-term projects, and 43 percent say that regulations stifle long-range spending. 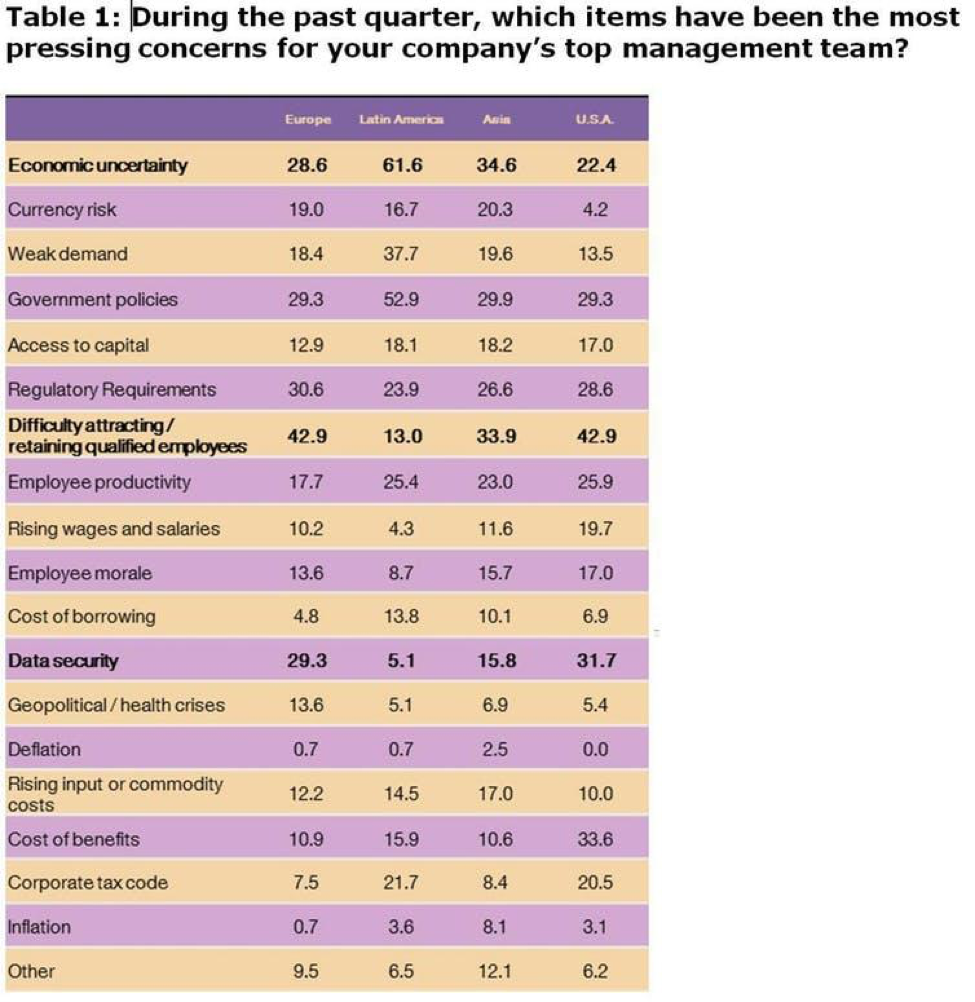 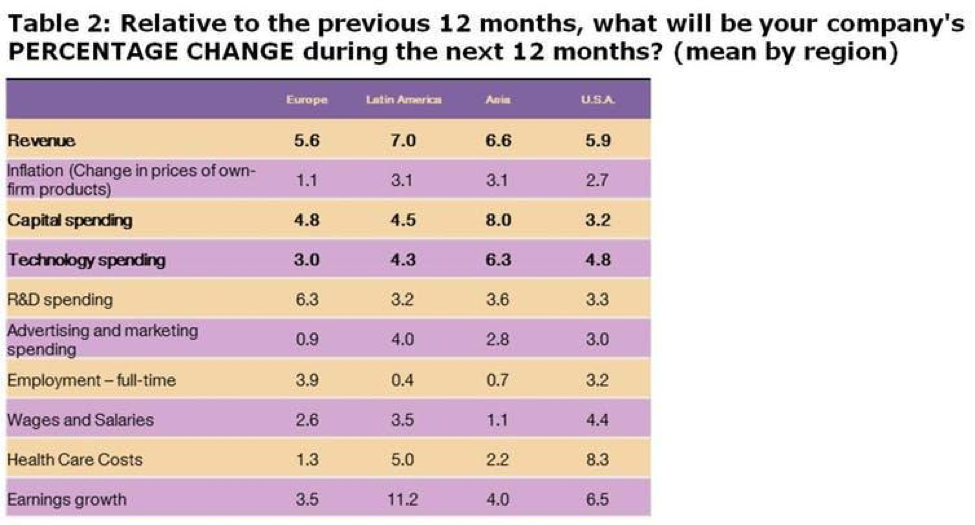 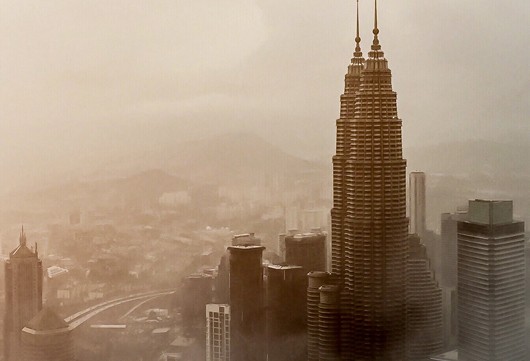 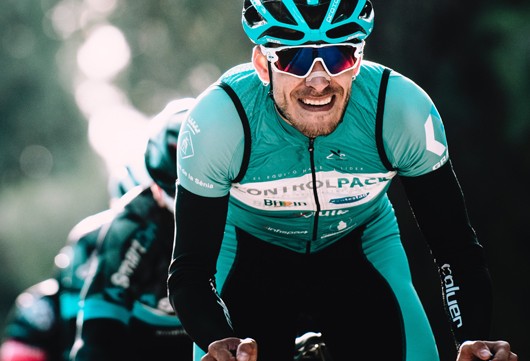 Investors are increasingly looking to make their portfolios more efficient. As such, the age old question about adopting an active or passive management approach comes up again and again. 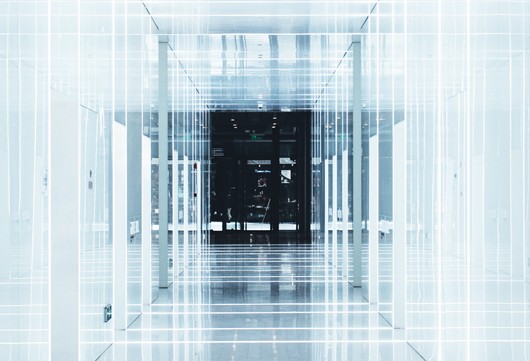