Predicting the future for super members

To help give superannuation members a better insight into their future finances, Mercer has re-launched the online Retirement Income Simulator, the first of its kind to take into consideration the federal government’s $1.6 million transfer balance cap.

As part of the 2016 Federal Budget changes, taking effect from 1 July 2017, a cap of $1.6 million will be enforced on superannuation savings that can be transferred from a concessionally taxed ‘accumulation account’ to a tax-free ‘retirement account’. According to Richard Starkey, Consulting Actuary, Retirement income modelling and apps at Mercer, this can have a significant impact on superannuation strategy. 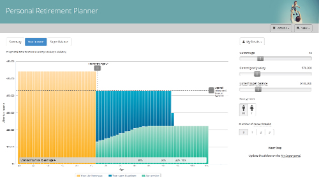 Mr Starkey added, “It allows individuals to model their superannuation comprehensively and ascertain if they are likely to exceed the transfer balance cap. Individuals can then determine a strategy that will give them the best financial outcome.”

The transfer balance cap is the most complicated change to super legislation for many years as it affects both the pre- and post-retirement phases. Mercer’s Retirement Income Simulator takes the burden off individuals and super funds.

“There are a number of online calculators available to the public but they do not include the level of assurance that the Mercer calculator offers in relation to factoring in current legislation. Additionally the calculator offers additional features such as multiple retirement scenarios, career change and career break features, investment return simulations and lump sum drawdowns at and during retirement,” said Mr Starkey.

In analysing the transfer balance cap, Mercer found that:

John, a graduate in his early 20s earning $80,000 is saving towards enough super to give him a retirement income of $70,000 for 25 years.  He needs to save just over $1.1m (in today’s dollars) to achieve this.  The amount of the transfer balance cap (in today's dollars) will be around $1.02m.  He will be prevented by the transfer balance cap from putting his entire super into a retirement income stream.

Josef and Sarah, a couple in their early 30s, are expecting to retire with enough to sustain an annual retirement income of $120,000 for 25 years, which would require around $1.9m in today’s dollars.  Josef currently has super of $300,000 and Sarah has $30,000.  Based on their current situation Josef is headed for a super balance of $1.1m and Sarah a balance of $490,000, but this would not allow them to reach their retirement income goal.  If they were to reach their goal by means of Josef making salary sacrifice contributions, Josef would breach the transfer balance cap and be prevented from putting his entire super into a retirement income stream.  By taking measures to equalise their super (spouse contributions, change of working patterns, non-concessional contributions to Sarah’s super), they could reach their goal and remain under the cap.

Mercer understands that superannuation is complex and believes that the Retirement Income Simulator will help streamline and ease the burden of planning for retirement.

If you would like help calculating how legislative changes will affect your members, please contact us.
*Required Fields

Super and Retirement news from Mercer