The 2020/21 Budget represents an unprecedented effort by the Federal government to steer the economy out of COVID-19 induced recession in a period where monetary policy is near the limit of its efficacy. Fiscal policy has taken centre stage and with government finances in a healthy position before the crisis, a record deficit has been announced that prioritised expenditure for job creation as a central pillar to restore spending and confidence across the household and corporate sectors. This strategy has seen the government: 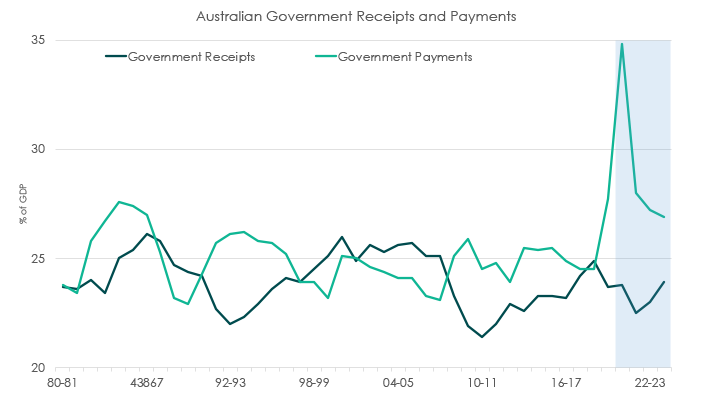 Rising expenditures and falling incomes have resulted in an underlying cash deficit of $213.7 billion, equivalent to 11% of GDP (chart 2). While this deficit is large by historical standards, the measures announced by the Australian government remain broadly in line with stimulus programs announced across other major developed economies. 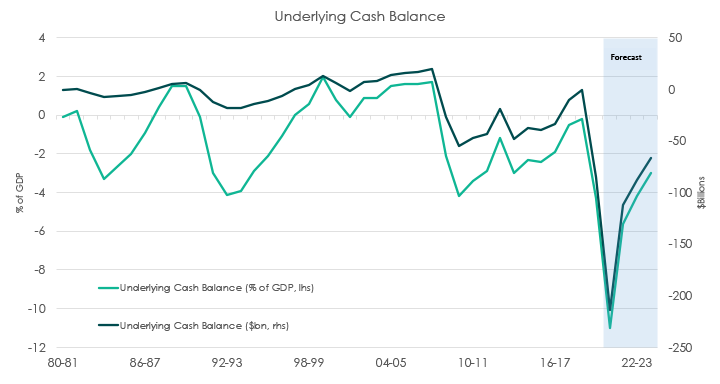 To finance these additional expenditures, net debt is expected to rise to around $700 billion, equivalent to 36.1% of GDP (chart 3) by June 2021 and is expected to peak at 43.8% in 2023-24. While additional borrowings will push up the government’s debt ratio, the size of Australian government debt remains low across Organisation for Economic Co-operation and Development (OECD) nations. Rising government expenditures to combat the economic fallout from COVID-19 is sensible and this is unlikely to affect Australia’s AAA credit rating over the medium term as long as economic growth improves and the government exercises prudence in public finances. Higher debt levels will result in rising interest repayments, however, with interest rates at record lows across the yield curve and the RBA expected to keep policy anchored to near zero percent over the near term, these additional commitments seem manageable. 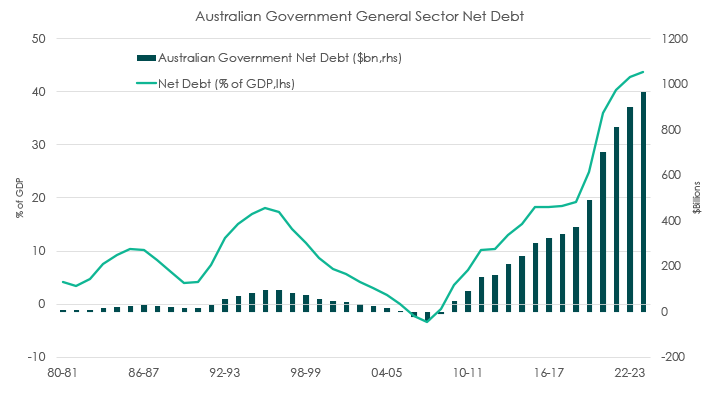 From here, Treasury expects real economic growth to pick up to 4.25% in 2021 from an expected decline of 3.75% in 2020. The unemployment rate is expected to peak at 8% before declining towards 6.5% through June 2022 which remains well above pre-COVID-19 levels. The journey back towards full employment remains challenging due to structural change brought forward by the pandemic, which may result in more permanent job losses. The external sector unlike during the Global Financial Crisis in 2008 is becoming less accommodative due to rising protectionism and tensions across global trade. Population growth, both through natural increase and net migration, is also likely to be less supportive for economic growth ahead.

While the measures announced by the government have delivered on increasing household income, it remains to be seen if household spending will rise as the pandemic has pushed the household savings ratio to a 40-year high (chart 4). Household balance sheets were highly leveraged going into the crisis and additional household disposable income could be prioritised for debt reduction over spending. Our expectation for the government’s policy mix from here would be to tilt away from income support in favour of investment to directly drive up the capital expenditure cycle. The government has announced $14 billion in additional infrastructure building initiatives since the start of the pandemic, which is a step in the right direction with state budgets likely to echo similar initiatives when released later this year. 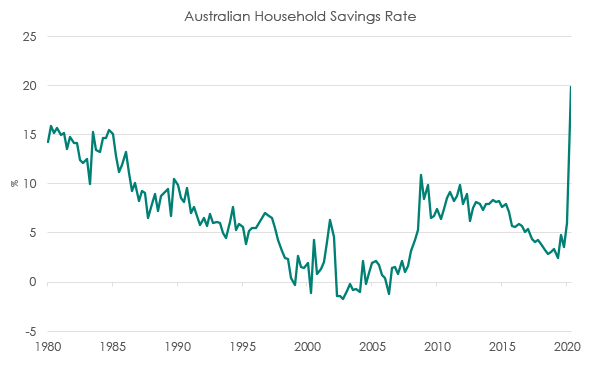 In an uncertain environment, the government will look to be nimble in its policy response and to recalibrate as needed to deal with shifting conditions. There may well be further spending commitments down the track once mortgage deferrals end, early superannuation withdrawals cease and Jobkeeper/Jobseeker payments diminish which will contribute to lower household incomes. Therefore, fiscal policy settings are likely to remain accommodative and loose as long as necessary to drive meaningful improvement across the labour market and to support the recovery in household incomes and spending. The road to surplus will likely be far off into the future.