Australia, February 24, 2022 – Mercer has called for sweeping changes to the superannuation tax system to improve the benefits for lower-income earners and reduce the gender pension gap. The recommendations include a $4,200 government superannuation contribution for primary carers following the birth of a child, and require all individuals over the age of 75 to draw down on their super assets.

Senior Partner at Mercer, Dr David Knox, said the changes would address inequality in a system that has an inherent bias towards high-income earners.

“We know that the biggest beneficiaries of the current super tax concessions are in fact those that need it the least – high-income earners. And while there has been no shortage of commentary that lower-income earners need greater concessions, we must find a way for reforms to be financially sustainable and place no added financial strain on the federal budget,” Dr Knox said.

“The level of concessions in super isn’t what needs to change. The distribution of it, however, is,” he said.

The suggested tax system for super would:

“Currently, there is no requirement for individuals to draw down their super assets during retirement, outside of what’s placed in a tax-exempt pension product, capped at $1.7 million. This means that most of the investment income from these assets is subject to just 15 per cent tax. That’s less than the lowest personal income tax rate,” said Dr Knox.

The suggested $4,200 super baby contribution for primary carers acts as a ‘carer’s credit’, recognising that many women spend a significant period out of the paid workforce caring for children. It equates to 10.5 per cent (the Superannuation Guarantee rate in 2022-23) of the minimum annual wage (currently $40,175). For an individual who cared for two children at the age of 30, this would lead to an increase in their retirement benefit of approximately $25,000.

“Almost every year, the super tax system is tinkered with, and still, issues of inequity persist,” Dr Knox said.

“It’s time to fix the problems for a fairer and simpler system, once and for all, and strengthen community confidence in superannuation for the long term,” he said. Mercer believes in building brighter futures by redefining the world of work, reshaping retirement and investment outcomes, and unlocking real health and well-being. Mercer’s approximately 25,000 employees are based in 43 countries and the firm operates in 130 countries. Mercer is a business of Marsh McLennan (NYSE: MMC), the world’s leading professional services firm in the areas of risk, strategy and people, with 83,000 colleagues and annual revenue of nearly $20 billion. Through its market-leading businesses including Marsh, Guy Carpenter and Oliver Wyman, Marsh McLennan helps clients navigate an increasingly dynamic and complex environment. For more information, visit mercer.com.au. Follow Mercer on LinkedIn and Twitter. 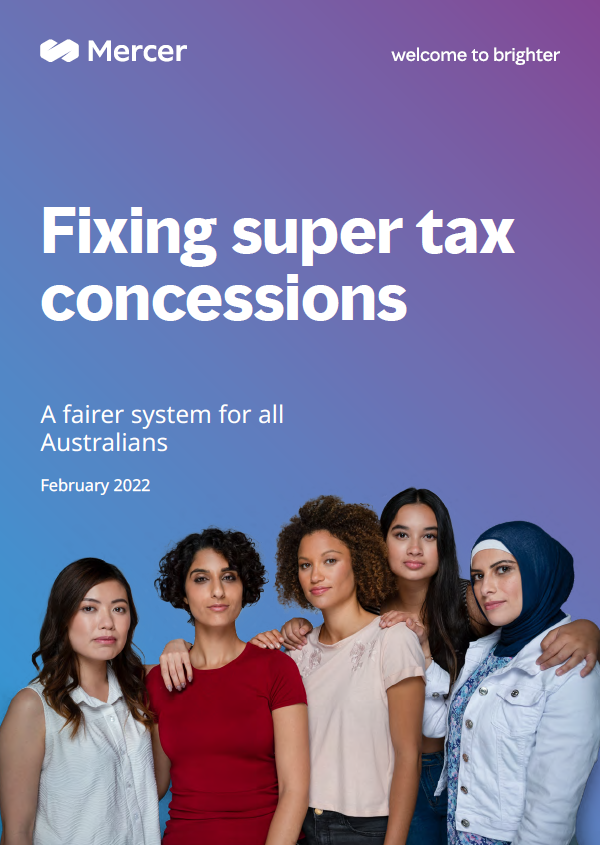