The fierce competition for talent and the anticipated economic recovery is putting pressure on salary increases for next year. More than 93 per cent of Australian organisations are planning salary increases for their workforce in 2022 of 3 per cent, up 0.5 per cent from 2021, according to Mercer’s annual Total Remuneration Survey (TRS).

In stark contrast, the 2020 survey reported that only one in five organisations had no plans to freeze salaries as a result of the pandemic.

Chi Tran, Head of Market Insights and Data at Mercer’s workforce consulting practice, said the pandemic had spurred market conditions unlike any other, with market forces permanently shifted.

“Much has been made of the talent shortage, with hiring and retaining top talent more competitive than ever. It’s generating higher-than-market pay, sign-on bonuses and premiums to hire those with critical skills,” said Ms Tran.

“The digitalisation of interaction remained a market driver in 2021, but the range of roles in demand has proliferated. For example, while we are still seeing steady growth in the high-tech industry from last year, demand for roles in logistics and consumer goods has also skyrocketed over the last year due to a permanent shift in preferences for online shopping,” she said.

The 2021 survey also revealed that:

Ms Tran said there was much that organisations could do beyond salary increases to attract and retain key talent.

“As the employment market shifts, organisations are finding that recruitment is about more than salary increases. Of course, it’s important to ensure pay structures are competitive to retain talent, but compensation alone won’t cut it.

“Employees are increasingly looking for a more personalised work experience – one that’s consistent with their personal values, provides greater flexibility and work-life balance, presents career development opportunities, and offers inspiring work. Organisations need to take this into account and ensure their benefits offering resonates with the needs and preferences of their people,” said Ms Tran.

The table below provides a comparison of salary differentials for hot job families within different states of Australia. Some specialised roles within Western Australia remain more highly paid than anywhere else in the country, including jobs within the Engineering & Science job family which are, on average, 8.3% higher than the national midpoint for this job family. Similarly, roles within Data Analytics & Business Intelligence and IT, Telecom & Internet sit 5.2% and 3.9% higher.

About the Total Remuneration Survey

With over 1,000 organisations participating in the survey, this year’s sample size grew by over 15% indicating that organisations continue to rely on the value of relevant salary market data to make informed and strategic decisions.

Mercer believes in building brighter futures by redefining the world of work, reshaping retirement and investment outcomes, and unlocking real health and well-being. Mercer’s approximately 25,000 employees are based in 43 countries and the firm operates in 130 countries. Mercer is a business of Marsh McLennan (NYSE: MMC), the world’s leading professional services firm in the areas of risk, strategy and people, with 81,000 colleagues and annual revenue of over $19 billion. Through its market-leading businesses including Marsh, Guy Carpenter and Oliver Wyman, Marsh McLennan helps clients navigate an increasingly dynamic and complex environment. For more information, visit www.mercer.com.au. Follow Mercer on Twitter @MercerAU and LinkedIn. 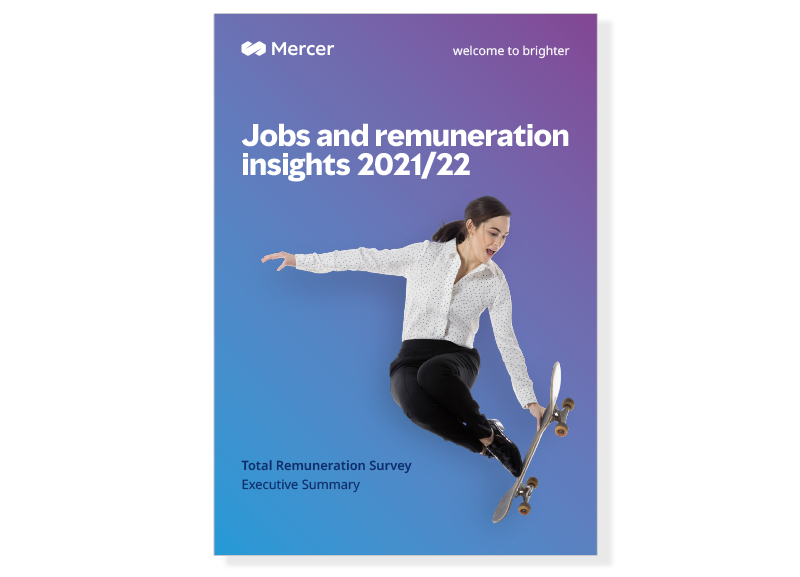 To learn more about Mercer complete the form below and a Mercer Consultant will be in contact with you.